FORT WORTH, Texas (RNS) — Stained glass is fragile. So, too, are the fortunes of a stained glass artist.

Don Young and his wife, Debora, were reminded of that lesson last month with the abrupt cancellation of a lucrative, once-in-a-lifetime commission to produce a series of stained glass windows for the J.W. MacGorman Chapel and Performing Arts Center on the campus of Southwestern Baptist Theological Seminary.

The project, launched in 2013, was to take a dozen years or more and could have brought the Youngs, who run a small studio out of their Fort Worth home, as much as $2 million in income.

Debora and Don Young in Fort Worth, Texas. RNS photo by Bruce Tomaso

“In our line of work, a job like that — oh, my God, it just doesn’t happen,” Don Young said in an interview with Religion News Service.

“It was like a dream. And then, just like that, we went from a dream job with a regular paycheck to nothing.”

The windows, more than 60 in all, were to honor titans of the conservative resurgence within the Southern Baptist Convention. That movement began in the late 1970s with the stated goal of reversing what its proponents perceived as a liberal drift away from an unbending, unambiguous adherence to biblical inerrancy.

One tenet of the conservative movement is that the Bible prescribes separate roles for men and women, precluding the latter from several functions of ministry. Another is that science can never override the supreme truth of Scripture — on, for example, such matters as creation.

In early April, the seminary’s board of trustees announced that it was removing the 32 windows that the Youngs had already completed, “in the best interest of the institution.”

Southwestern Baptist offered no further explanation for the decision. A seminary spokesman, after initially saying he would respond to a written request from RNS for comment, did not do so. 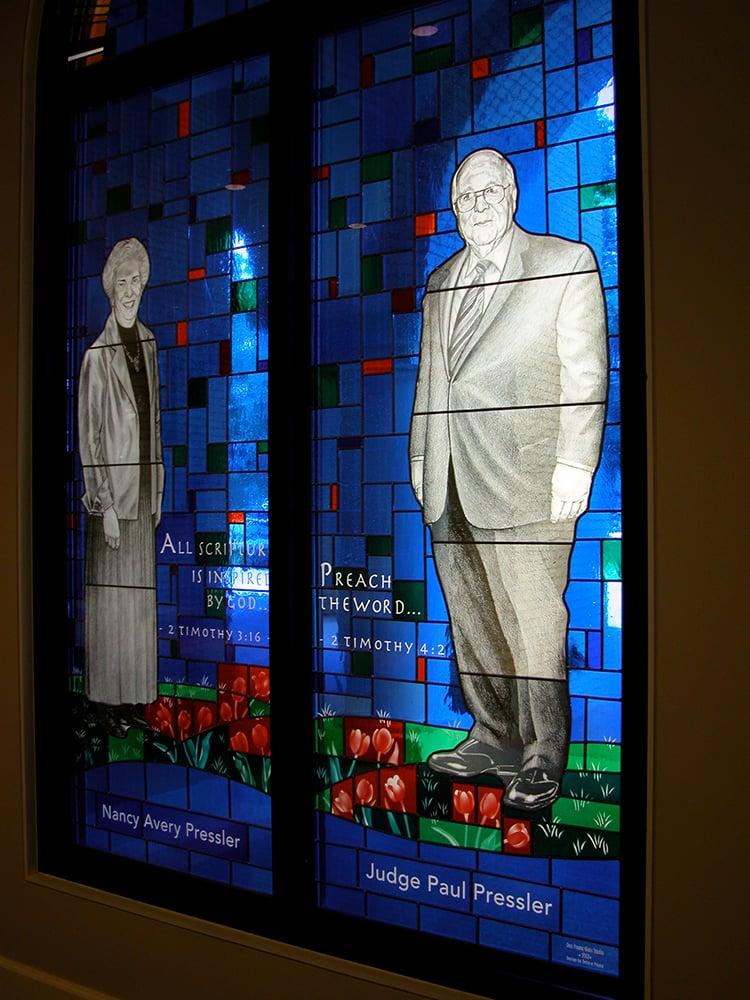 One of the windows paid homage to Paige Patterson, the longtime president of Southwestern Baptist who was fired last year.

A June 1, 2018, written statement from Kevin Ueckert, chairman of Southwestern’s board of trustees, said the board unanimously concluded that Patterson ignored or mishandled female students’ complaints of sexual assault, both at the Fort Worth seminary and at Southeastern Baptist Theological Seminary in Wake Forest, N.C., where Patterson had previously served as president.

Patterson has steadfastly declined to comment on his firing or on the allegations that the trustees said compelled it.

Another of the Youngs’ windows depicted Paul Pressler, a Southern Baptist leader from Houston who became the subject of a 2017 lawsuit alleging decades of sexual abuse. Pressler denied the allegations of abuse in court filings. Those abuse claims against Pressler, a former Texas legislator and state appellate judge, were dismissed last November.

Southwestern Baptist said it would “safely store” the windows until it figured out what to do with them.

On Friday, Jerry Falwell Jr., the president of Liberty University in Lynchburg, Va., announced that he’d brought two of the windows — one depicting his father, the late Jerry Falwell, Liberty’s founder — to the university, where they’ll be displayed in the Jerry Falwell Museum. 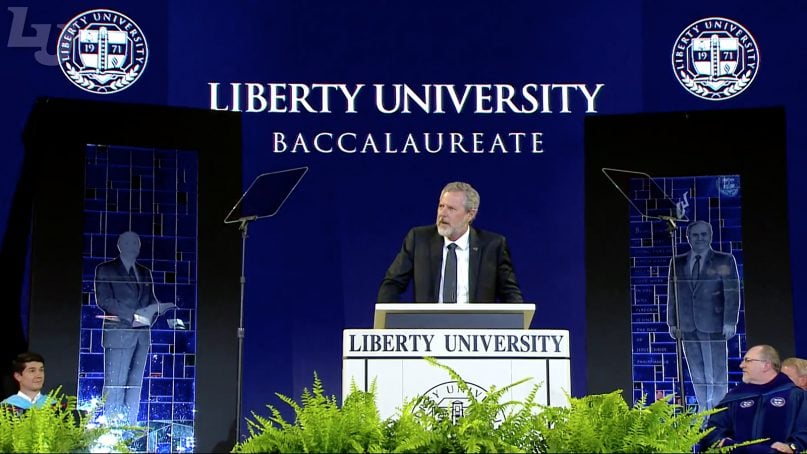 Falwell, speaking at Liberty’s baccalaureate service, took the opportunity to rebuke what he called “a new regime” within the Southern Baptist Convention that’s turning away from “the high view of Scripture” advanced by his father and others.

“We will continue to honor the conservative leaders who reformed the Southern Baptist Convention,” he told the graduating Liberty students, “and we place our hope in your generation to be the ones to step up and provide better leadership for the future.”

The stained glass project was conceived and organized six years ago by Dorothy Patterson, the wife of Paige Patterson. She led efforts to privately raise money to pay for the windows.

“My dream,” she told the Fort Worth Star-Telegram in December 2013, “was to portray the 20-year history of the conservative resurgence of the Southern Baptist church.” 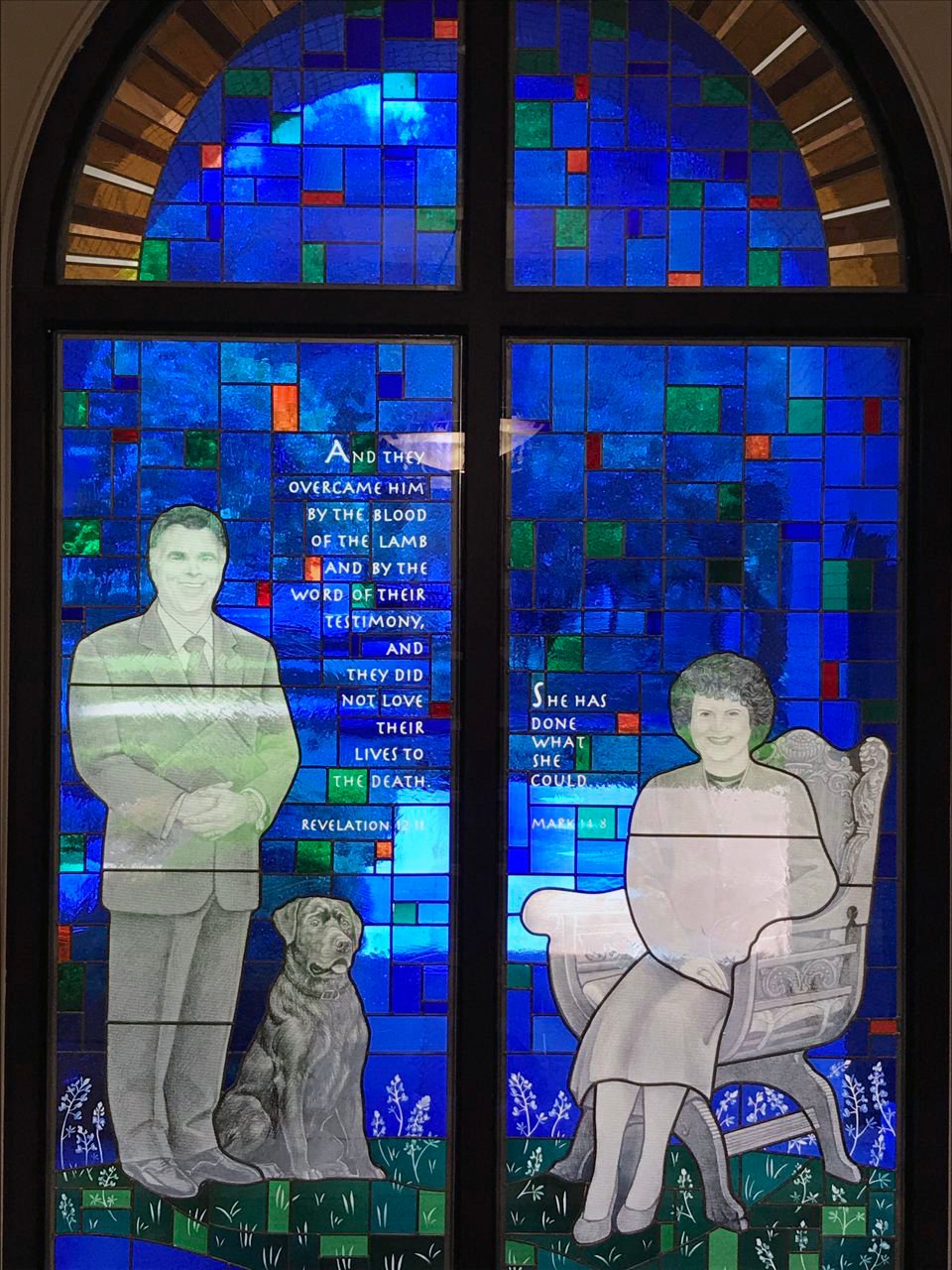 But Dorothy Patterson’s dream was not shared by the seminary’s trustees, said Debora Young.

“It was Dorothy’s pet,” she said. “The trustees were never really in favor of it. But Dorothy wanted it done, so everyone just sort of went along with it.”

Paige and Dorothy Patterson (along with their black Labrador) were the subjects of one of the windows installed by the Youngs.

Paige Patterson, a former president of the Southern Baptist Convention and the Fort Worth seminary’s forceful president for 15 years, was a leading architect of the conservative resurgence.

At a Southwestern chapel service in 2015, he said he recalled a time in the late 1970s when just 16 professors in Southern Baptist seminaries believed in biblical inerrancy.

“Now,” he proudly added, “just a few years later, you can go to any one of our six theological seminaries, and you will not find one single professor who does not believe in the inerrancy and the infallibility of God’s Word. That is a phenomenal act of God.” Don Young, a Texas native, said he was raised as a Baptist but that neither he nor his wife is an adherent to the church.

“We’re spiritual,” the 67-year-old artist said, “but I’d describe our religion as ‘bohemian.’”

The Youngs had planned to complete “about three dozen” windows before the project was cancelled. Don Young said no one from Southwestern told him or Debora that the windows were coming down. They learned about it after the fact from an online news story.

“We were taken totally by surprise. No one from there has contacted us about the removal — including Mrs. Patterson,” he said.

“When people ask me if I’m sorry about what happened, I tell them, ‘Honestly, I’m sorry about the money.’ We have no complaints. We did really well for these past few years. We made enough to pay off our house 10 years early.

“But we were counting on working on this for several years more. That was going to be our retirement.”