LAKEWOOD, N.J. (RNS) — Like any rapidly expanding exurb, this town of 103,000 residents 1 1/2 hours south of Manhattan along the Jersey Shore has received its influx of outsiders with trepidation about the changing nature of their home turf.

One thing that makes Lakewood different is that nearly half the town’s population boom over the past three decades is primarily the result of the arrival of Orthodox Jews, who have nearly doubled the town’s rolls just since 2000.

Now the fastest growing town in New Jersey and the largest in Ocean County, Lakewood and its surrounding area is experiencing what urban policy analysts call a demographic tipping point: the moment when a geography’s character changes unalterably. That has led to a social and civic dispute that has touched issues of density, land-use, zoning restrictions and, according to natives and newcomers alike, ugly outbreaks of anti-Semitism.

But another thing that sets Lakewood apart: the novel methods a group, known as Lakewood Neighbors, has adopted since December 2017 to bridge community divides among Hispanic, African American and Orthodox Jewish residents that once might have seemed irreconcilable. Now Lakewood Neighbors’ methods are regarded as a model for other towns that are experiencing the same expansion as Lakewood.

Lakewood has been a center of Orthodox Jewish life for more than 75 years, since Rabbi Aaron Kotler, a refugee from the Nazi invasion of Eastern Europe, relocated his yeshiva, Beth Medrash Govoha, to what was then a town of some 10,000 people. Sometimes referred to as the Harvard of Orthodox higher education, the school, with 6,700 students and a budget of $50 million a year, has played a big part in accelerating Lakewood’s rapid growth. Many graduates end up staying in Lakewood and running businesses tailored to the town’s religious needs. 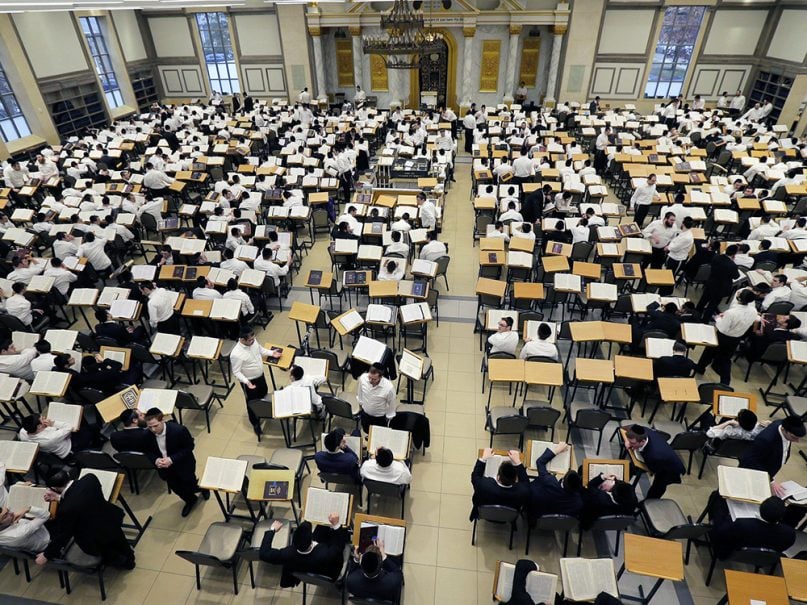 Animosity toward Lakewood’s Jewish population began to manifest itself as far back as the 1980s, when plans to build the Zichron Schneur Synagogue met with a zoning challenge from its neighbors, according to Rabbi Aaron Kotler, 55, the grandson of Beth Medrash Govoha’s founder and its current president. The challenge failed, but soon opposition erupted whenever new residents filed plans for synagogues and Jewish schools.

Lakewood Mayor Raymond Coles, who has lived in the town for more than 30 years, vividly recalls the tensions when he settled there. “There was a lot of unfamiliarity over who was moving in, aired by other minority communities who felt they were being pushed out as the Orthodox were moving in,” said Coles.

Lakewood’s squabbles may never have come to a head had not the internet come along. “The zoning battles we see today aren’t new,” said Kotler. “With social media and the quick spread of news, we hear about it more widely.”

On the heels of the social media attention came a barrage of negative news coverage, which drowned out the stories the town’s leaders wanted to tell about Lakewood’s growth and prosperity.

The picture of Lakewood as unwelcoming was bolstered by new reports of anti-semitic backlash as Orthodox Jews began to move to nearby towns such as Toms River, Brick and Jackson. 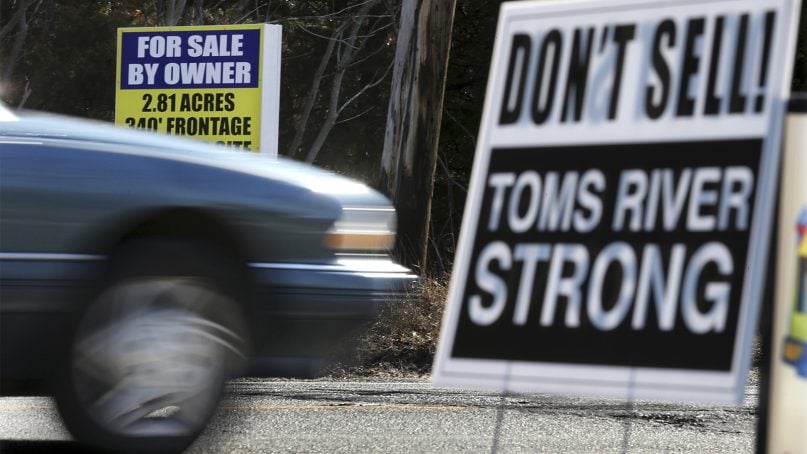 A for sale sign is seen across the street from a don’t sell, Toms River strong sign on Feb. 22, 2016, in Toms River, N.J. A housing crunch in the New Jersey shore town that’s home to one of the nation’s largest Hasidic populations has neighboring towns changing their own laws. Real estate agents and investors in the Lakewood area have been soliciting residents in several nearby neighborhoods, looking to find homes that fit the needs of the growing Jewish community. (AP Photo/Mel Evans)

In 2009, the Toms River town council had passed a zoning law that would require a minimum of 10 acres to build a house of worship, a measure Kotler believed was intended to stop Orthodox Jews and Muslims from moving in.

Over the past year, the resistance of Lakewood’s neighbors became more abusive and went beyond zoning meetings. In January, a Facebook page, called Rise Up Ocean County, posted a video to its 14,000 followers that bore the hallmarks of Martin Niemoller’s famous confessional poem about the Holocaust. 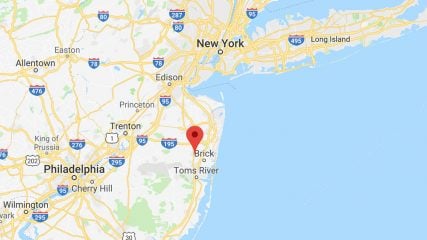 Lakewood is located near the northern coast of New Jersey, with Brick and Toms River nearby. Image courtesy of Google Maps

Rise Up Ocean County has since insisted that it is not anti-Semitic, adding that its objections merely relate to “quality of life” and are not aimed at any specific group.

But in another incident in April, Brick Township Mayor John Ducey was embroiled in a Twitter storm for his tepid response to an anti-Semitic tweet that said that the town needed to do something about its “parks and beaches” being invaded by “Hasidic and Orthodox Jews (from neighboring towns) … Our tax paying residents are being forced out while politicians sit and do nothing.”

The mayor’s response was to “call police with any problems.” After the backlash, Ducey condemned the tweet as “bigoted” and pointed out that it would be illegal to bar nonresidents from using Brick’s parks. 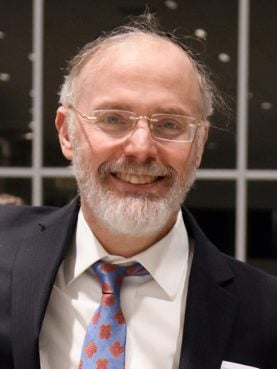 “When young Orthodox couples move into Toms River from Lakewood, they might as well be coming from California,” adds Kotler. “Toms River has no experience or capability of knowing what their needs are. They don’t know what basic things like an eruv, mikveh and mezuzah are,” referring to common ritual infrastructure of Orthodox Judaism.

In September of 2016, Kotler said, he was reading about Park City, Utah, where tensions over expanding ski resorts had forced emergency community meetings and produced what became known as the Mountain Accord. “This laid out an overarching vision for the city and set out red lines for what sort of development would and would not be done in Park City,” said the rabbi.

He realized Lakewood could use a similar organization, not only to come up with a development plan, but to dissipate bad feelings between various factions in town. Calling themselves Lakewood Neighbors, the diverse group began holding quarterly meetings to discuss problems, from traffic jams to schools, in person and launched a website with the hope of painting a positive image of the town.

But in February, with problems persisting, Lakewood Neighbors hired Stacie Smith, a veteran mediator with the Consensus Building Institute, whose clients have included the Department of Defense, the World Health Organization and the Bureau of Indian Affairs. Smith said she has facilitated highly complex, multi-stakeholder disputes for almost two decades but never one for a community with a clash like Lakewood’s. 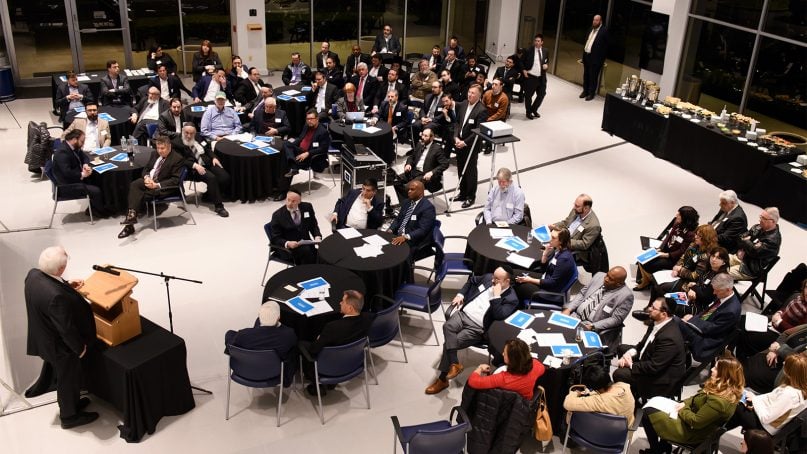 Smith and her team camped out at Lakewood’s municipal building over four days, conducting interviews and focus groups. CBI next held a public charette, allowing 90 key stakeholders from different parts of the community to air their concerns and have them parsed in relation to others’ complaints.

What they found did not come as news to the people of Lakewood. In an 18-page summary published in May, Smith wrote that most of the people interviewed “noted the existence of intergroup tensions … (and) acknowledged the presence of intolerant attitudes and biased behaviors toward the Orthodox,” which were usually exacerbated when news outlets overemphasized “negative stories about Lakewood and members of the Orthodox community.”

Smith’s report also confirmed that the problems were spreading to surrounding suburbs, which also helped alert officials in those towns to the solutions Lakewood was pursuing.

Already, there are small signs of hope. Last month, Toms River councilman Maurice Hill advocated for a comprehensive streetlight inventory in an area where there is a large concentration of Orthodox residents who refrain from driving on the Sabbath and often have to walk poorly-lit, narrow sidewalks.

Hill has also suggested that Lakewood Neighbors help with the changes as Orthodox Jews continue to move into Toms River and Jackson. 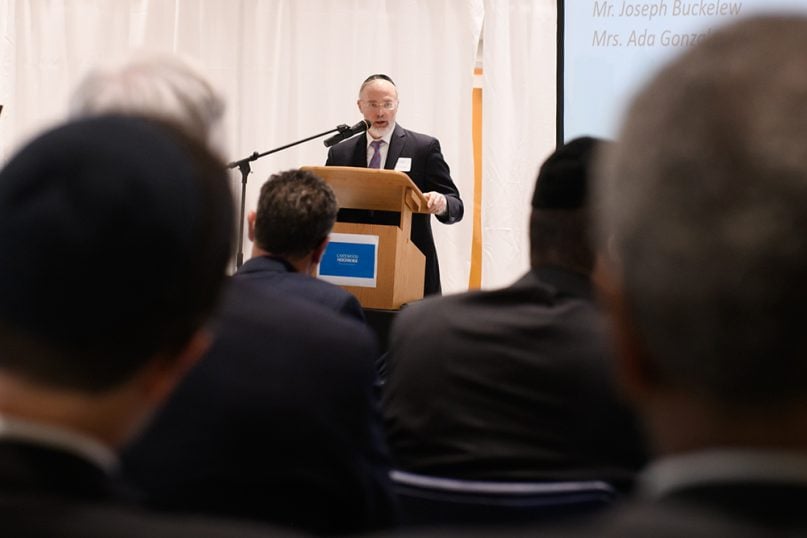 Kotler hopes that continued cross-border mediation efforts that include Lakewood’s surrounding towns will help demystify the Orthodox Jewish community from its neighbors and even help form lasting bonds.

Lakewood’s efforts have taken on a greater significance as anti-Semitism has revived in recent months. This week, at the invitation of Lakewood Neighbors, Elan Carr, the U.S. special envoy for monitoring and combating anti-Semitism, addressed a crowd of 60 residents at the Lakewood Township Municipal Building.

Carr spoke about what he described as the tale of two Americas: one that accepts Jews and a “darker America that is hard to America. It’s the America of Rise Up Ocean County, the America of Poway and Pittsburgh,” Carr said.

The antidote to this America, said Lakewood Mayor Coles, is to bring people together.

“People there are afraid because they don’t know who these people are and say they don’t want a repeat of Lakewood there,” said Coles. “What we really need to do is open up lines of communication with the neighboring towns so that we can lay out our concerns and fears on the table.”