Earlier this month, General Electric (GE) abandoned its use of commercial paper:

Once the largest borrower in the market, GE Capital is abandoning its use of commercial paper – debt with a maturity of up to 270 days. The move could add to its cost of financing, which is already under upward pressure after downgrades to the company’s credit rating. GE’s financial services division is instead becoming more reliant on bank lending and had available net credit facilities of $40.8B at the end of September.

I knew it was one of the biggest borrowers of commercial paper during the Financial Crisis. I also knew GE’s cost of funding would rise, but did not attempt to estimate the impact. Having its commercial paper pulled might have been the first signs of a run on the bank. It could also raise questions as to why GE would have $16 billion in loans backing $70 billion in debt. This could be devastating for GE.

In October, Moody’s downgraded GE’s senior unsecured debt two notches from A2 to Baa1. The company’s bond yields and cost of funding have spiked since the downgrade and the loss of its commercial paper program. Peter Tchir of Academy Securities argued the market’s fears about GE’s bonds are overblown since about $26 billion of GE’s debt load was maturing in the next two years, mostly in 2020.

However, rising funding costs will likely have an immediate impact on GE Capital, the company’s financing arm. At Q3 2018, GE Capital had assets of $129 billion, of which about $16 billion was related to loans and commercial mortgages. Another $37 billion was in cash and investment securities likely related to its $36 billion of insurance contracts. 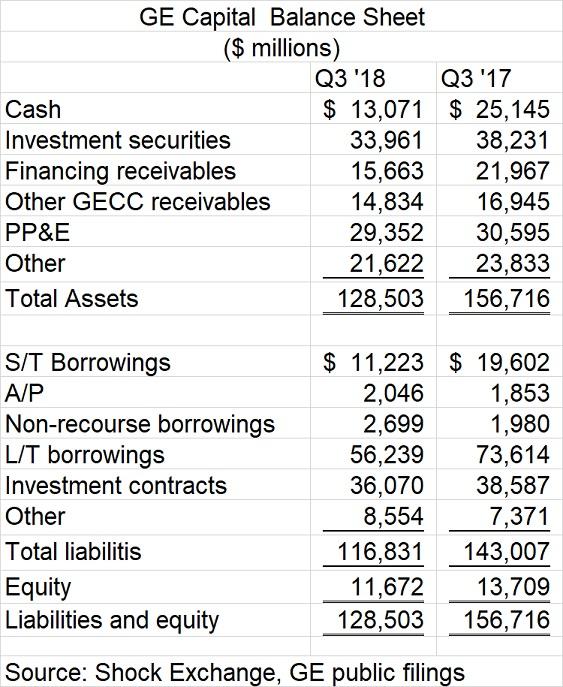 GE Capital currently does not make money. In Q3 2018, it had revenue of $2.5 billion, flat Y/Y. GE Capital Aviation Services (“GECAS”) generated $1.2 billion in revenue, and the insurance operations generated another $700 million. Segment profit was $0 during the quarter. For the first nine months of 2018, segment profit was -$0.4 billion.

Those segment profits will likely fall further as GE Capital’s cost of funding rises. Below are bond yields of selected GE Capital bonds.

Will The Rating Agencies Respond?

If GE Capital’s current funding costs exceed the yield on the loans, then that negative interest margin needs to be acknowledged. It could practically make GE Capital a black hole. This could potentially impact GE’s credit rating. GE has bank facilities in place, but has only tapped about $2 billion on these facilities. These bank loans sound more like bridge loans – short-term financing to fund GE long enough to unwind its financing arm. They could potentially be prohibitively expensive.

By my estimation, GE’s current credit metrics are so poor that Moody’s would be warranted to downgrade GE to junk status. Questions over GE Capital’s precarious position will not help matters. Can GE successfully unwind its loan portfolio given its dire straits? Secondly, how much of GE of Capital’s $70 billion of debt load – and its interest expense – really belongs to GE? Does this potentially impact GE’s true debt level or its credit rating in the eyes of Moody’s, S&P or Fitch?

The run on the bank experienced by GE likely amplified its funding costs. It could amplify losses at GE Capital and/or make it untenable for (1) GE Capital to sell its loan portfolio or (2) grow the portfolio. Once investors or rating agencies parse through GE Capital’s potential for future losses, then GE’s share price could come under pressure. Sell GE.

Disclosure: I am/we are short GE.

I wrote this article myself, and it expresses my own opinions. I am not receiving compensation for it (other than from Seeking Alpha). I have no business relationship with any company whose stock is mentioned in this article.